Top down thinking or Bottom up?

Unilever is one of the biggest washing powder manufacturers in the world. You would think that they would also have a massive research and development budget. Like many companies, they will have to make the decision to manufacture by top down thinking or bottom up thinking.

While their sales and PR department may well have developed since the company began, the process in of the production of washing powder has changed little. It’s still a horrible dirty job which involves forcing boiling chemicals through a nozzle with terrific levels of pressure and speed behind it. Once this chemical concoction comes out of the other side, they should naturally disperse into vapour and powder.

In the 1970s Unilever had a massive problem the nozzles just didn’t function efficiently. This may sound like a small problem but in a market that makes sales of 5 billion a year, this is a mega problem.

The company response was predictable. They had the brightest and best physicists and mathematicians, experts in chemical analysis, specialists in the transition from liquid to solid, simply the best of the best.

Today those experts would be called intelligent designers – they could be trusted to come up with an optimal plan. 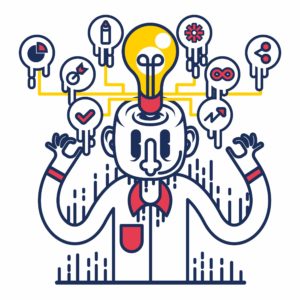 So these men sat down and worked out long complicated equations of what happens during the manufacture of washing powder. After a long period of discussion, they came up with a brand-new design.

Guess what happened to this new design?
You’ve got it, it didn’t work. It had the same design faults as the original model. Not every granule powder was the same size and the nozzles themselves blocked frequently causing a break in production.

These biologists have one distinct advantage, they were scientists they understood the difference between failure and success and we used to empirically testing their solutions.

Building failure into the system

They took the nozzle and made ten copies of each one, so they had eleven identical copies of one nozzle. They then made incredibly small measurable changes in each one. Each nozzle was only about 1% different from the original. The nozzles may have been smaller, wider, fatter or thinner; they may have had a bigger borehole or a smaller one.

The biologists  rigorously tested each of these nozzles under working conditions in the plant. They then took the best performing nozzle and created ten more almost identical but 1% different new models.

This whole process was repeated  until they had 50 generations of nozzles. That meant that they had had 499 failures.

In the process, they had created one outstanding nozzle that was a hundred times better than the originals.

The mathematicians approach with top-down thinking they used their best brains and designed it there was no testing and therefore no measure of success or failure. Once it was produced and tested it failed.

On the other hand, the biologists started with one failure and no plan. They didn’t hold meetings; they didn’t understand the equations. This different approach produced the nozzle that had many shapes and thicknesses in its design. It would have been inconceivable any mathematician could devise a shape anything like it.

The biologists’ approach was building from the bottom up. They created the right kind of system. One that was enabling a means of driving progress and a mindset to accept that failure was inevitable that this system to flourish.

Combining Top down thinking or Bottom up

There are many examples in the natural world and the world of artificial intelligence that demonstrate systems that can learn from failure have a distinct advantage. It’s not surprising that a team of biologists chose this strategy of slightly adapting each model. It mirrors what happens in nature in the process of evolution whereby the failure test is known as natural selection.

Survival of the fittest reigns supreme. The biologists set out to create failure because they understood that by doing so they could empirically test the result and come up with something outstanding. In this case, the rejected nozzles help to drive progression of the design because they recognise the failures.

Richard Dawkins in the blind watchmaker mathematically worked out how long it would take a single monkey to type out the following line from Hamlet.
“Me thinks it is like a weasel.”

Dawkins, on the other hand, set up a failure mechanism. He programmed a computer to see which of the nonsensical phrases was closer to the target phrase. The computer rejected every other possibility. It takes the phrase which is the closest and randomly varies it. Incredibly it took only 30 generations of very small minute changes to have something that vaguely resembled to the naked eye me thinks it looks like a weasel. By the 43rd generation has got the right phrase.

The Power of Memory

This is because the computer was using memory. The natural world calls this the illusion of design. It looks as though a vast network of intelligence created some animals, but the only force at work was a blind process of testing for failures. The Unilever nozzle looks as though it comes under this category looking at the exquisitely designed not nozzle it looks as though the intelligent design was at work.

As we’ve already seen, there was no design capability at all in its manufacture. The biologists use evolution.
Markets have an ongoing process of trial and error. In businesses is called bankruptcy. In a free market system when a company goes the wall it is revealing that at least one process of price, advertising, management or the product wasn’t working compared with the competition.

The Principals of Evolution and business

This is the way the business weeds out weak performing companies; the market forces send them bankrupt. The companies who thrive and prosper have strategies that are replicated by their competitors. Like the Unilever nozzle, the companies successes are driven by cumulative adaptation. The failure of businesses in a free market is not a defect within the system it is the indispensable aspect of evolution. On the other hand, communist countries which don’t have a free market economy protect companies from failure by subsidising them.

This is the reason why planned economies don’t work then manned by intelligent planners who don’t test their design. Without the benefit of a valid test, any system is plagued by rigidity. In free market bankruptcy lubricates the system. Planners learn from the mistakes within the system which in turn creates new ideas driven forward by testing.

This isn’t to say that free market systems are perfect. They create problems price-fixing, inequalities tells monopolies and in the end companies to large to fail so, they have to be protected by governments. However, these markets work because of business failures not in spite of them.

Unfortunately, they often take the trite answers as gospel. They make assumptions because some guru tells them it is correct. What is needed is a mixture top-down reasoning of the sort the mathematicians applied and bottom-up in the innovation of the type the biologists used which fuses knowledge. This type of knowledge reveals potential flaws.

To do this, you have to have the courage of your own convictions and the ability to test early. If you have a squeeze page then from day one, make to squeeze pages but don’t change one more than 2%. Test for a week. Take the best-converting one and change this by 2% and then split test both of them.

Only by this method of testing within your own business can you come to any reasonable conclusion. You have to accept that the majority of your results will be failures. On the other hand your successes will have been empirically tested and in the long run, your profits will increase exponentially.